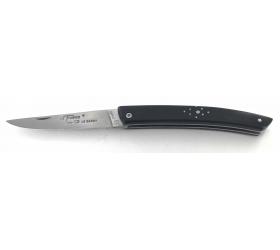 Cutlery AU SABOT is above all a family story. Then several owners succeed one another. It was in March 1973 that Jean Sauzedde bought the brand which has remained a family business since that date. Year by year, the range will be enlarged by the acquisition of complementary cutlery companies.

Cutlery manufacturer in Thiers, Etienne Fontenille registered the Au Sabot brand in 1870. Then the business was sold several times to cutlery makers in Thiers.
It was in 1973 that Jean Sauzedde bought the brand Au Sabot. He will offer a range of kitchen knives and specialize in regional pocket knives.

Jean-Michel Sauzedde took over from his father in 1997. He developed the LE THIERS® knife, an iconic knife from Thiers, the capital of cutlery. He declines the Le Thiers ® in pocket knife, table knife, hunting knife.

For the 140 years of the brand Au Sabot he created a limited version THE THIERS® friend's knife.

In 2020, for the brand's 150th anniversary, he developed a new LE THIERS® knife which he wanted to be technical with its Sandwich steel blade and avant-garde with its composite handle based on carbon fiber.